With the Core Web Vitals update completed, we’ve put together a review on the SEO impacts we’ve seen so far.

Core Web Vitals, deemed as ‘Google’s biggest algorithm update’, began it’s roll out in June 2021 (after two delays!). With the update completed at the end of August 2021, we’ve put together a review on the impacts we’ve seen so far.

What are Core Web Vitals?

Core Web Vitals measures user experience, as part of the ‘page experience update’. Google uses a ‘pass/fail’ assessment, with the criteria examining three key metrics related to a website’s speed for both mobile and desktop. For a low-down on all things Core Web Vitals, including what the update is and the potential consequences for SEO, take a read of this article.

There was lots happening in the search industry over Summer 2021, with Core Web Vitals going live, two core updates in June and July, as well as an anti-spam update. So, things were predictably quite volatile.

SEMrush released the results of their Core Web Vitals study. The findings are from July, a month into the update, so we can expect to see more change in the final findings.

They found some small impacts, with the overall number of URLs with ‘good’ metrics increasing in the search results for both mobile and desktop. So, for sites who score well, they’re getting better organic visibility.

Mobile results were more volatile than desktop. Mobile sites who scored ‘poor’ for TBT (total blocking time) were 10% less likely to appear in the top search result positions when the algorithm was first released. However, soon after they won back their top positions. So, we can see that Google is continuously monitoring and adjusting how they score the metrics, and their influence on rankings. Perhaps, they were too harsh on the requirements?

For CLS (cumulative layout shift) and LCP (largest contentful paint), there was an increase in the number of URLs scoring ‘good’ in the mobile SERPs, illustrating a small but important relation between good scores and ranking performance.

Generally speaking, their desktop report shows clearer trends than mobile. The majority of pages ranking in the top 10 positions have ‘good’ LCP, TBT and CLS scores.

In conclusion, the initial analysis suggests a small improvement for those who score well for CWV.

Our findings for the homewares industry

The homewares industry has seen some changes since the algorithm go-live.

After an extensive speed enhancement project, our homewares clients all pass the Core Web Vitals assessments. Their strong speed performance means that they haven’t seen any consequences since the algorithm updated, and they continue to dominate their first page rankings.

Looking at some of the key competitors, the results fluctuate.

One of the biggest brands, Hillary’s, has a very sophisticated website. While it’s creative and sleek, it doesn’t actually pass CWV. Even though it falls short on it’s performance, it hasn’t seen any major impacts on it’s rankings. So, perhaps it’s domain authority outweighs its poor speed performance. However, a smaller, and not so organically successful competitor, Shuttercraft, has a pretty basic website and does pass CWV. This brand has seen sharp increases in it’s rankings since the algorithm update.

This suggests that for brands who have a big opportunity to increase their SEO performance, CWV can act as the lever to higher success.

iProspect examined 1500 sites in their study, and they found that 31% of these sites will benefit from Core Web Vitals because they have ‘good’ metric scores. This indicates a positive correlation between Core Web Vitals performance and organic search performance.

These industry findings raise questions around the impact of a website’s design on Core Web Vitals performance; fashion sites tend to have a lot of imagery and interactive elements and they typically use e-commerce platforms which may be slowing down page speed.

However, this doesn’t mean that elaborate websites can’t perform well for Core Web Vitals. There are plenty of large websites who pass because of speed optimisation work.

Have Google said anything about the update?

Google hasn't (as of yet) released any statements regarding Core Web Vitals.

In November 2020, they trialed adding an icon in some search results for webpages which passed the algorithm update. Google said that if the visual indicator was successful in the trial, it would be permanently added from June 2021. It seems as though it wasn’t effective, as it hasn’t been added to the search results.

For SEO, it was beneficial to see which competitors were passing, but was there any real benefit for searchers? It made us question whether searchers paid any attention to this tiny icon, and even if they did, how much did they really care about Core Web Vitals? Because no impacts were seen on click-through-rate for those which had the icon.

What does the algorithm mean for your brand?

The results vary from industry to industry, and from brand to brand, so you might have already seen heightened organic traffic, or perhaps a dip in search performance if your site doesn’t pass the threshold.

It's about staying ahead of your competitors. If you fall behind, you may see losses but if you perform well then it shouldn’t impact you negatively, it can even act as a way to achieve further organic success.

Have you been affected by Core Web Vitals? Get in touch with us, we’re more than happy to help out and get your organic performance back up to speed. 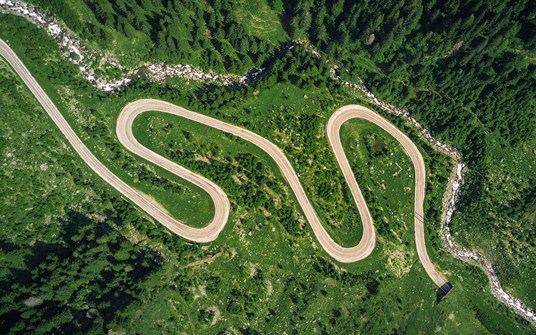 Is sustainable search the future?